Over the years, as our research team has listened to community leaders and looked at the data we’ve collected, we have seen how racial divisions continue to plague communities of faith in our city. Religious leaders from all faith traditions and racial backgrounds identify race relations as a critically important issue. Over the past days and weeks, we have seen hurt, anger, and frustration expressed in protests in the streets of Little Rock, including along the 630 Interstate Freeway, which itself acts as a racial dividing line in the city. 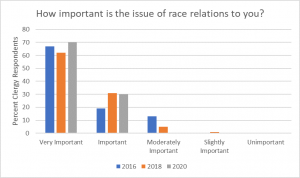 We have just begun to survey religious leaders for our 2020 study, but we can already see a trend. Today, there are no longer any faith leaders in Little Rock who are responding that the issue of race relations is “moderately important” or “slightly important.” It is only “important” (to a minority of about 30% of clergy) or “very important” (to the vast majority clergy).

After hosting a Little Rock Religious Leaders Summit last year, our research team decided that our work in 2020 would more directly address questions of race and social justice. Among other topics that faith leaders emphasized at the Summit, racial division rose to the top again and again.

We have prepared a survey for congregation members, to be distributed this fall, which includes questions about race relations in Little Rock, hope for racial reconciliation in the future, and the efforts that their place of worship is making to be welcoming to people from diverse racial backgrounds. We also ask members—just as we ask clergy—how important the issue of race relations is to them, but we include follow up questions about whether they want to see their congregation active in addressing the issue and if they would volunteer to help. We invite all congregations in Little Rock to participate in this research and to distribute the survey to their members. 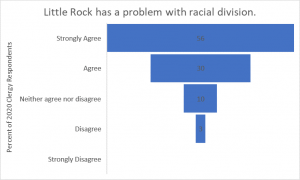 Another change we have made for 2020 is that every participating congregation will receive a report on the anonymous responses of their members. That means that we will provide faith leaders with data on just how important issues of racial division are to their members. We also plan to connect congregations who want to work for change with one another and with other organizations in our community.

When we look at the data we have collected over the years, they tell a story of a city that is deeply divided. Little Rock has a history of racial violence, segregation, red-lining, and hate. It is no surprise that the vast majority (86%) of 2020 responding clergy strongly agree or agree that “Little Rock has a problem with racial division.” 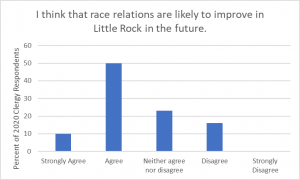 But places of worship and people of faith have always played a powerful role in mobilizing people to fight for justice and in healing past wounds. The early results from our 2020 study reveal that there is still a lot of hope in our city. Sixty percent of our early clergy responders, agree or strongly agree that race relations are likely to improve in Little Rock in the future. Communities of faith are key to making that happen.

Our 2020 survey of religious leaders is still in the field. In light of recent protests and police violence, additional responses may indicate more hope for change in the future, or less. However we might feel in this moment, communities of faith will likely need to play a role in moving our city and our country to a better place.

We invite congregations from all faith traditions to participate in the 2020 research, to contribute your voices, and hear what your members have to say.

Dr. Rebecca Glazier is a political science professor in the School of Public Affairs at the University of Arkansas at Little Rock and the director of the Little Rock Congregations Study. Congregations that are interested in participating in the research can reach her via email at raglazier@ualr.edu.